Samsung’s Galaxy 7: Not all it’s cracked up to be?

Pardon my pun but it’s the point of this blog. Don’t drop the Samsung Galaxy S7 because the glass may be easier to break than previous versions of the popular Galaxy phone.

I purchased a Samsung Galaxy S7 this month. I think the photo and video components (sharpness, low light sensitivity, etc.) and longer lasting battery life are outstanding. I like the ability to add micro sd card memory to the phone. It’s also water and dust resistant for weather elements. Overall, the S7 is an excellent communications tool.

What disappoints me about the Galaxy S7? When dropped, it’s easy to break or crack the Corning Gorilla Glass 4 on the Galaxy S7. If you do- it’s expensive to replace. The standard Samsung S7 warranty doesn’t cover replacement costs for accidental damage to the phone.

You can get a two-year Samsung Protection Plus warranty when you buy the phone for $129. I wasn’t aware of this when I bought the phone. Even if I had been, I’m not sure I would have bought the extra warranty coverage. It allows up to two replacements in a 12 month period for accidental damage claims but you may also get hit with a $79 deductible cost for each of those two claims.

This AT&T commercial for the Samsung Galaxy S7 suggests that it’s durable enough to survive a tumble down brick steps and a dunk in a mud puddle.

Again- Here’s the S7 bouncing off that brick step:

Below is a photo of my Galaxy S7’s front glass after it bounced on my concrete driveway. It didn’t survive the 3-foot fall after slipping out of my shirt pocket as I bent over to pick a ripe tomato from a potted tomato plant perched on my driveway. So much for the S7 phone’s durability. 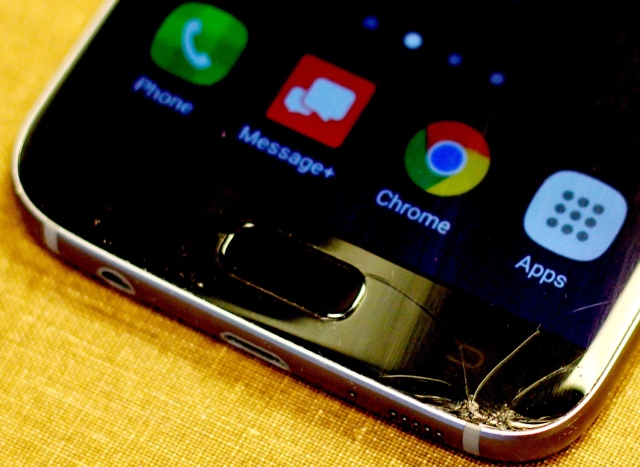 My Samsung Galaxy S7 cracked front glass after it fell from my shirt pocket when I bent over to pick a tomato from a potted tomato plant in my driveway.

In the meantime, I’ve ordered an Otterbox Commuter Series case ($34.95) to protect the phone. I’m hoping the broken glass won’t spider web its way across the rest of my S7’s front glass display. If it does I may have no choice but to fork over a couple of hundred bucks to have it replaced-Perhaps with another competitor’s phone.

One last thing Samsung: Perhaps you might consider giving your customers the same benefit HTC offers it’s customers with the Uh Oh Damage Protection Plan. The HTC plan covers accidental damage (free replacement) to its flagship phone during the first 12 months after a customer’s purchase. It covers cracked glass.

My views are my own and not a reflection of my employer. I'm a professor of Journalism at the University of Nebraska-Lincoln. I've also been a working journalist for the past 29 years. I have covered news stories in war zones, reported on human and natural disasters, presidential conventions, a presidential inauguration and the September 11th, 2001 attack on the World Trade Center in New York City. My career experiences include work as an award-winning documentary producer, television news reporter, photographer, producer, and anchor. I worked at WIBW-TV, Topeka, KS., KCTV, Kansas City, MO, WKBD-TV, Detroit, MI., WILX-TV, Lansing, MI. and WBNS-TV, Columbus, OH. I have also worked as a contributing reporter for The Columbus Dispatch, Associated Press, CBS, CNN, the Ohio News Network and lecture at the Kosovo Institute of Journalism and Communications. I have a bachelor’s degree in journalism from the University of Kansas and a master’s degree in telecommunications management from Michigan State University.
View all posts by Bernard McCoy →
This entry was posted in deceptive ad, Journalism, new media, Smart phones, technology and tagged Galaxy, S7, Samsung, Samsung Galaxy 7, Samsung Galaxy S7, Smart phones. Bookmark the permalink.