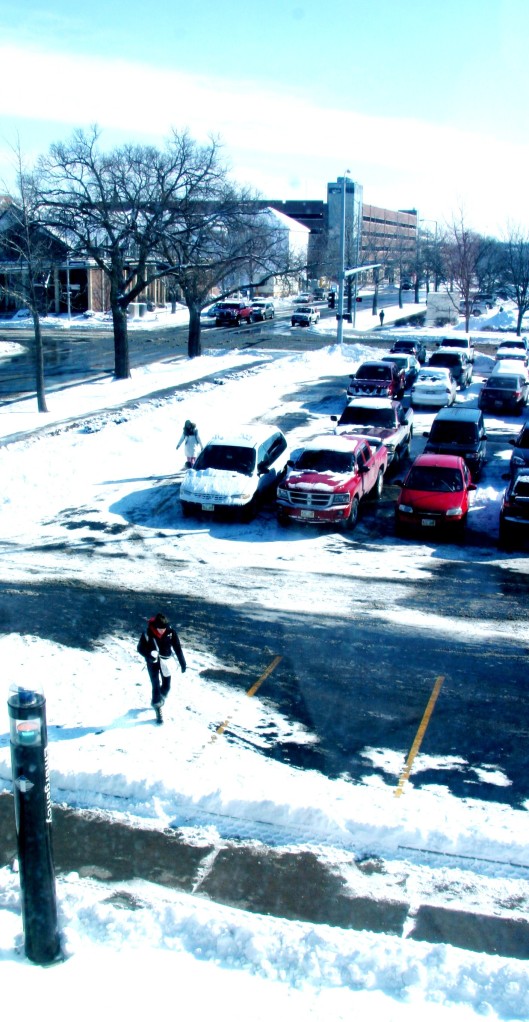 The snow-covered view out my Andersen Hall window at the University of Nebraska-Lincoln. Photo: Barney McCoy

In Lincoln, Neb., the snow that pummeled this stretch of the Midwest yesterday has given way to sunshine.

UNL classes have resumed. Despite the usual weather related accidents, traffic has returned to near normal. Businesses are open. Life is good again for most of us.

“Snowmageddon” was the term some used to describe the weather event dubbed “Q” by the Weather Channel.

To be sure, it was a significant snowfall, but not as bad as some meteorologists claimed it would be. We received about 6 inches of snow. Other parts of the region received up to 20 inches of snow.

Nor was the storm, as nasty locally as some gleamy-eyed TV news anchors and reporters made it sound on Wednesday and Thursday.

Maybe I missed it, but I didn’t hear much about the benefits of this storm; The badly needed moisture it brings farmers, ranchers, gardeners, and municipalities that have been locked in a serious drought for almost a year. The latest reports say more than 75 percent of Nebraska is in an “exceptional drought” which is worse than an “extreme drought.”

The insulated coating of snow that protects the seeds planted for the coming year from direct exposure to freezing conditions. A chance for corn farmers to have moist soils this spring to get their crops planted and off to a healthy start. That’s a good thing too.

We need these benefits of a big snow more right now than the temporary transportation inconveniences and ever present dangers associated with navigating snow-covered streets and roads.

Last season, Nebraska’s corn crop took a quarter billion dollar loss due to the drought.  Ranchers were forced to sell cattle because the drought dried up the grass they feed on. Cities like Lincoln are talking stricter water conservation measures and higher costs for water users. Other places worry there may not be enough water available at any price if the drought persists.

This moisture, from this snow, may help keep the drought-driven crop and livestock losses we had last year from happening this year.

The region still needs four to eight inches of new moisture to free us from the drought. Keep in mind that experts say it takes roughly a 10 inches of snow to equal an inch of moisture; More if the snow is powdery and dry, less if the snow is wet and heavy.

Let’s hope more moisture, in any form, arrives soon. Meanwhile, let us tolerate, even enjoy, what nature has delivered to our doorstep.

My views are my own and not a reflection of my employer. I'm a professor of Journalism at the University of Nebraska-Lincoln. I've also been a working journalist for the past 29 years. I have covered news stories in war zones, reported on human and natural disasters, presidential conventions, a presidential inauguration and the September 11th, 2001 attack on the World Trade Center in New York City. My career experiences include work as an award-winning documentary producer, television news reporter, photographer, producer, and anchor. I worked at WIBW-TV, Topeka, KS., KCTV, Kansas City, MO, WKBD-TV, Detroit, MI., WILX-TV, Lansing, MI. and WBNS-TV, Columbus, OH. I have also worked as a contributing reporter for The Columbus Dispatch, Associated Press, CBS, CNN, the Ohio News Network and lecture at the Kosovo Institute of Journalism and Communications. I have a bachelor’s degree in journalism from the University of Kansas and a master’s degree in telecommunications management from Michigan State University.
View all posts by Bernard McCoy →
This entry was posted in Economy, Environment, nebraska, The United States, Uncategorized, weather and tagged blizzard, Lincoln, nebraska snow, Q, snowstorm, university of Nebraska-Lincoln, UNL. Bookmark the permalink.