Corn leaves in the wind (and other drought effects)

The author holds up corn stalk leaves the August wind has carried from miles away into Lincoln, Nebraska neighborhoods as many farmers are being forced to harvest their drought stressed corn for silage feed.

I’ve never seen it before.

Across Lincoln, foot-long dried corn leaves are flying in from miles away, blown by the wind, scattered across city lawns and parks.  The browned corn leaves that seemingly have a life and journey of their own, are another sign of the worst drought in decades. It’s taking a heavy toll on crops, livestock and lives across the Midwest this summer.

In this case, many Nebraska farmers are harvesting their corn for livestock silage because it’s been so damaged by our drought conditions. Many of the same farmers have benefited from historically high crop prices and yields in the past several years. It’s scary to see how quickly things change.

It’s this way across much of the corn belt. According to the latest United State Agriculture Department report, the U.S. corn harvest got off to the fastest-ever start last week as early planting this past spring and record high summer temperatures accelerated crop development.

The USDA this week rated 51 percent of the corn crop as “poor” or “very poor” because of the drought’s effect. The latest national crop loss estimates for this year are running at $20-billion.  Despite the fact that this was the largest corn crop planted since 1937, production is projected to be down 13 percent, the lowest output since 2006, said the National Crop Insurance Service.

According to the Daily Nebraskan, the 2012 drought shows no sign of slowing down.  Extreme drought can cause major crop losses, widespread water restrictions or shortages, according to the U.S. Drought Monitor in UNL’s National Drought Mitigation Center.

“We’ve seen the drought progressively getting worse,” Brian Fuchs, a climatologist at the center told the DN.  “About the only thing that has saved us in the past few weeks is the temperatures have finally cooled off,” he added, referring to recent highs sometimes 20 degrees cooler than much of the past two months. Nebraska is forecast to remain dry into November, Fuchs said. Currently, more than 90 percent of Nebraska is in extreme drought, with a strip 300 miles long of exceptional drought — the most severe level — in the state’s western half.

Last week, the Drought Mitigation Center released these updated statistics on the drought:

Across the Missouri River in Iowa, conditions are just as bad. According to the Sioux City Journal, the severe drought is prompting tri-state farmers in the worst-hit areas to salvage what they can now before the stalks dry up even more.

“Our corn is too far gone,” said Akron, Iowa, area farmer Randy Kroksh,who chopped 40 acres of silage Monday. “I have some fields that won’t yield anything. In some places, there might be 50 bushels per acre, but I doubt it.” Kroksh told the SCJ his farm hadn’t had any measurable precipitation since Memorial Day weekend.

Who pays for the losses?

While much of the drought damaged crops will be covered by insurance, the insurance coverage itself typically pays farmers for up to 80 percent of the production costs in the event of a total crop loss. “It won’t cover our sweat equity,” said a colleague of mine this past week whose husband grows a corn crop in the Lincoln area each year. My colleague also reminded me that a drought next year could make things even worse. Crop insurance claims this year will send next year’s crop insurance premiums higher, out of reach for many farmers who may not be able to afford the higher insurance coverage costs next season. 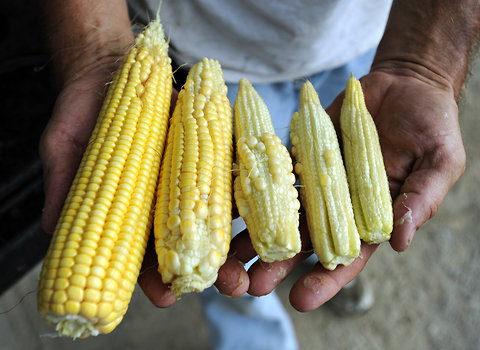 And for the many farmers who are harvesting their damaged corn for silage; The silage harvest typically pulls more nutrients from the soil than mature corn crops. This means higher expenses for fertilizers and other soil conditioners next year to return the nutrients to the soil robbed by this season’s silage harvest. According to the University of Missouri Extension Service, a 100-bushel corn crop harvested as silage removes more than twice as much nitrogen, three times as much phosphorus and 10 times as much potassium as when the crop is harvested for grain. The removal of the stalks accounts for the extra nutrient removed from the land.

For consumers, the crop losses mean higher food prices. Less corn being converted to ethanol may also contribute to higher fuel prices because less ethanol based fuels are being produced. Consumers, (taxpayers) will also help foot the bill this year to help pay crop insurance losses.  According to a CNN Money report, The federal government pays on average 60 cents of every dollar of premium sold for crop insurance. Last year, the federal government recorded $11.9 billion worth of crop insurance premiums, $7.4 billion of which was paid by the government, according to figures kept by the U.S. Department of Agriculture Risk Management Agency.

So, when I see those dried and shrunken corn leaves hoisted by the wind in Lincoln, I say a prayer.  I pray this drought will end soon, that it won’t return for a long time to come. That our weather this year is an anomaly, not part of a new weather norm that could change our lives in profoundly negative and permanent ways.

My views are my own and not a reflection of my employer. I'm a professor of Journalism at the University of Nebraska-Lincoln. I've also been a working journalist for the past 29 years. I have covered news stories in war zones, reported on human and natural disasters, presidential conventions, a presidential inauguration and the September 11th, 2001 attack on the World Trade Center in New York City. My career experiences include work as an award-winning documentary producer, television news reporter, photographer, producer, and anchor. I worked at WIBW-TV, Topeka, KS., KCTV, Kansas City, MO, WKBD-TV, Detroit, MI., WILX-TV, Lansing, MI. and WBNS-TV, Columbus, OH. I have also worked as a contributing reporter for The Columbus Dispatch, Associated Press, CBS, CNN, the Ohio News Network and lecture at the Kosovo Institute of Journalism and Communications. I have a bachelor’s degree in journalism from the University of Kansas and a master’s degree in telecommunications management from Michigan State University.
View all posts by Bernard McCoy →
This entry was posted in broadcasting, Environment, Kansas, nebraska, News, newspapers, television, The United States, Uncategorized, University of Nebraska and tagged corn, corn farmers, corn prices, crop insurance, drought, drought conditions, Drought mitigation center, farmers, nebraska, silage, university of Nebraska-Lincoln, USDA, weather. Bookmark the permalink.