The only thing more predictable than hurricane season may be the questionable, even ridiculous antics of some television journalists assigned to cover the storms. 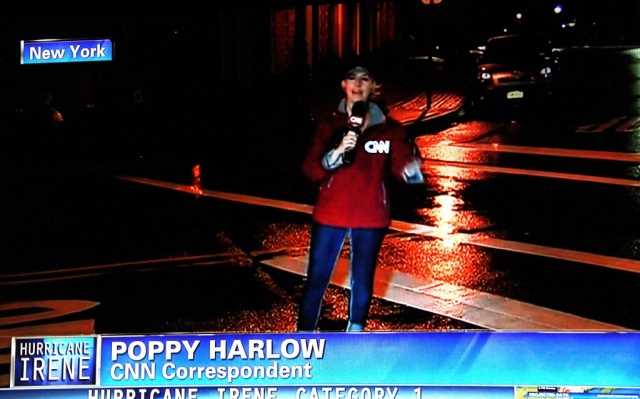 No need to question the newsworthiness of reporting on Hurricane Irene. It disrupted tens of millions of lives, left an estimated 4.5 million people without power, caused multiple fatalities, flooding, evacuations, billions in damages and thousands of flight cancellations from South Carolina north into Canada. 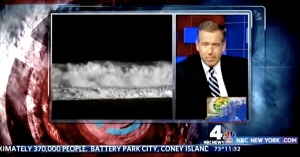 Brian Williams stopped by the WNBC-TV studios in New York City Sunday to give his impressions of Hurricane Irene.

TV viewers depend on the timely information news operations deliver to viewers in times of potential danger.

There are many reasons though to question the predictable carelessness that accompanies some storm reporting.

In some cases journalists place themselves in unnecessary danger while sending contradictory messages to their viewers.  No need to get preachy here. I’ll let the following examples speak for themselves.

The Weather Channel’s Eric Fisher was lashed by high winds, rain and hypocrisy Saturday while lamenting the people who are out and about “setting a bad example” during dangerous hurricane conditions in Virginia Beach, Va.  The punchline to Fisher’s “Do what I say, don’t do what I’m doing”  live report is a mooning by a guy in the background.

It’s one thing for reporters to cover hurricanes. It’s another thing to let yourself  be coated by a foul-smelling unidentified foam while covering a hurricane.  WTTG-TV meteorologist Tucker Barnes was plastered with the foam as it flew from the hurricane-driven ocean in Ocean, Md. FoxNation later had this note about the material Barnes immersed himself in:

“That “organic material” was most likely the effects of raw sewage pouring into the water during the storm. It doesn’t taste great,” he said.

Early Sunday, CNN’s Poppy Harlow appeared in a live report while updating street conditions as Irene approached New York City. Harlow was driving a vehicle through the storm during her live shot. She frequently took her eyes off the road to look into the video camera during her report.

CNN's Poppy Harlow takes her eyes off the road while driving as she reports live on Hurricane Irene in New York City.

In essence, Harlow created a traffic hazard for herself, her videographer and others while reporting on the storm danger.  How would she explain this to a police officer or CNN’s insurance company if she and her videographer were involved in an accident?

Should reporters, producers and news organizations wonder if audiences notice the credibility reducing impact of such behavior, they can check YouTube and Twitter.

The Fisher video had racked up more than 186,000 YouTube views when I  checked late Sunday. In contrast, the Barnes YouTube video had only 7,656 views but sparked a lively Twitter conversation with a #seafoam hash tag that drew thousands of tweets.  Most of the tweets don’t reflect well on Barnes who is also mentioned by Time.com, the Chicago Sun-Times, the New York Daily News and hundreds of other online publications.

My views are my own and not a reflection of my employer. I'm a professor of Journalism at the University of Nebraska-Lincoln. I've also been a working journalist for the past 29 years. I have covered news stories in war zones, reported on human and natural disasters, presidential conventions, a presidential inauguration and the September 11th, 2001 attack on the World Trade Center in New York City. My career experiences include work as an award-winning documentary producer, television news reporter, photographer, producer, and anchor. I worked at WIBW-TV, Topeka, KS., KCTV, Kansas City, MO, WKBD-TV, Detroit, MI., WILX-TV, Lansing, MI. and WBNS-TV, Columbus, OH. I have also worked as a contributing reporter for The Columbus Dispatch, Associated Press, CBS, CNN, the Ohio News Network and lecture at the Kosovo Institute of Journalism and Communications. I have a bachelor’s degree in journalism from the University of Kansas and a master’s degree in telecommunications management from Michigan State University.
View all posts by Bernard McCoy →
This entry was posted in broadcasting, Journalism, new media, News, North Carolina, television, The United States and tagged CNN, Eric Fisher, Fox News, hurricane, Hurricane Irene, Irene, Journalism, Poppy Harlow, questionable journalism, Tucker Barnes, Weather Channel, WTTG. Bookmark the permalink.