Emily McCoy in spring 1992. Always a twinkle in her eyes.

Time does this. It brings changes we can’t choose, ignore or control.

We can hope for the best. In matters like these though we’re not the ones rolling the cosmic dice.

I’m about to go from “father” to “father-of-the-bride.”

I didn’t choose it. I admit though, I really do like my soon-to-be son-in-law and his family. 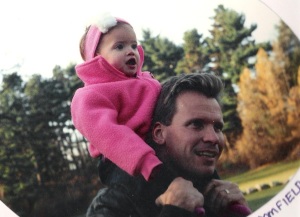 Dad and daughter hiking together in Michigan in early winter, 1991.

I can’t ignore it. That’s OK too. It’s an experience (the “W” word) I’m excited and a bit scared to see unfold.

I can’t control it either. A new chapter in my life, and more importantly, our oldest  daughter’s life is being written- I don’t get to do the writing. That’s a bit scary too.

If their life together is as fulfilling as mine has been with my beautiful, loving, compassionate wife Joanne these past 22 years, I’ll be thrilled,,and relieved.

This Saturday, our oldest daughter Emily McCoy becomes Emily Glover, married to Dan, who goes by the same last name-Glover.

OK, here’s the “W” word.  It’s going to be their wedding! There will be plenty of friends and family to bear  witness and celebrate.

Dan will take my place as the most important man in my daughter’s life.  My sails are unfurled, strong winds are pushing me through this latest rite of passage. I’m eager to see where life’s winds blow me as father and father-in-law.

Emily and dad in North Carolina, 1992

But first- I have to let go of the past. But only a little.

It seems like yesterday, not 20 years ago, Emily was born. Looking back, I can’t help but reflect. How lucky I’ve been to watch her grow, share treasured father-daughter moments, see her begin to work through life’s challenges, for better or worse, on her own terms.

Emily McCoy while studying in Germany in 2010.

Through this, Emily has become the beautiful young woman she is today. Her mother, Joanne, gets much of the credit.  For the record though, deep inside, Emily will always be my little girl, my Mimi, my sunlight and hope for the future.

I can’t help it. You see, it’s a father thing. No matter her age, she’ll always be those things to me.

Saturday, I’ll stand front and center, or maybe a bit to the right and a step behind. I’ll watch Emily marry a wonderful young man. I’ll be filled with pride and hope. I’ll also let go of a bit of my fatherly past to welcome a bit of my future as a father-in-law.

Emily will embark on a wonderful new journey. Of course there will be speed bumps along the way. It does build character. After all, they won’t always get to throw the cosmic dice either. Someone, something else, may do it for them.  With love, happiness, compassion and kindness though Emily and Dan should navigate their lives for a long time to come.

My views are my own and not a reflection of my employer. I'm a professor of Journalism at the University of Nebraska-Lincoln. I've also been a working journalist for the past 29 years. I have covered news stories in war zones, reported on human and natural disasters, presidential conventions, a presidential inauguration and the September 11th, 2001 attack on the World Trade Center in New York City. My career experiences include work as an award-winning documentary producer, television news reporter, photographer, producer, and anchor. I worked at WIBW-TV, Topeka, KS., KCTV, Kansas City, MO, WKBD-TV, Detroit, MI., WILX-TV, Lansing, MI. and WBNS-TV, Columbus, OH. I have also worked as a contributing reporter for The Columbus Dispatch, Associated Press, CBS, CNN, the Ohio News Network and lecture at the Kosovo Institute of Journalism and Communications. I have a bachelor’s degree in journalism from the University of Kansas and a master’s degree in telecommunications management from Michigan State University.
View all posts by Bernard McCoy →
This entry was posted in Kansas, nebraska and tagged Baldwin Kansas, Dan Glover, Danforth Chapel, Emily McCoy, father, father-in-law, husband, Kansas University, Lawrence Kansas, marriage, wedding, wife. Bookmark the permalink.

8 Responses to This father’s daughter marrys