The Missouri River roars and humbles

A Wendy's restaurant in Percival, Iowa is closed and surrounded by a wall of dirt to fend off what experts predict will be a dramatic rise in floodwaters from the Missouri River. Photo: Barney McCoy

I have seen rainbows explode across the Nebraska sky as noisy thunderstorms fade in the distance leaving tornado damage to lives and property. I’ve watched the spring prairie explode in carpets of wild flowers that stretch to the Kansas horizon after flooding rains washed away crops and roads. 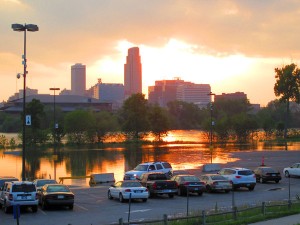 Thursday, the Missouri River reached its highest level at Omaha since the completion of six upstream dams.Thursday morning, the river hit 30.51 feet. The previous post-dam record had been 30.26 feet on July 10, 1993. Photo: The Recreational Cyclist

The latter is playing out this week across parts of the Dakotas, Iowa, Nebraska, Missouri and Kansas. The Missouri River, propelled by heavy spring rains and melting snow from the mountains of Montana and Wyoming, has washed over  its banks in many areas, swallowing crops and roads, homes and businesses.

The worst, we are told, is yet to come along thousands of square miles and scores of communities that lie along this vast American flood plain. 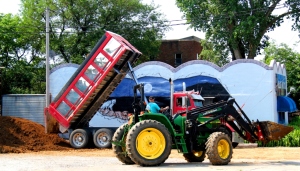 Soil is piled high outside the Blue Moon Bar in downtown Hamburg, Iowa, in preparation for flooding which could strike in the next week to 10 days. Photo: Barney McCoy

I stopped in Hamburg, Iowa yesterday to see firsthand the non-stop preparations being made for the rising Missouri River, which flows five miles west of the southwest Iowa city.

Outside the Blue Moon Cafe and Bar, I found 79-year-old Clarence Hendrickson operating a tractor and pushing tons of freshly dumped dirt into a 13-foot-tall protective levee around the business.  Up and down Hamburg’s Main Street, downtown shops were surrounded by sandbags prepped and ready to be deployed against flood waters should they seep into the downtown district.

“The waiting is the worst part,” said Hendrickson. “Not knowing when and if the river will flood here and for how long.”

Hamburg Fire Chief Dan Sturn told me the city could begin filling with flood waters in the next week to 10 days depending on a long list of variables: how quickly the river rises, if levees hold or give way, if weather in the upper Missouri river basin is hot or cold, wet or dry. 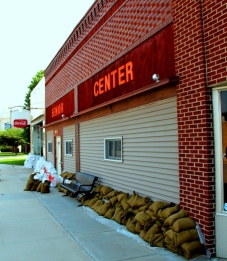 Sandbags line Main Street businesses in Hamburg, Iowa where flood waters from the Missouri River threaten to strike the city within the next week to 10 days. Photo: Barney McCoy

According to the Associated Press “The rising Missouri River is set to reach peak flows within days and won’t return to normal until September as the Army Corps of Engineers manages a series of swollen reservoirs in Montana, North Dakota and South Dakota and faces the prospect of huge snowpack melting in the Rockies.”

In other words- The U.S. Army Corps of Engineers has no choice but to release  more water from Missouri River dams filled to capacity.

The river’s flow will be increased to 145,000 cfs Friday, and then 150,000 cfs Tuesday according to Jody Farhat, chief of the Corps’ Missouri River Basin Water Management Division in Omaha.

Farhat said releases will peak at 150,000 cfs and stay at that level until at least August. In Hamburg, residents are keeping a wary eye on a levee along the river that partially collapsed Tuesday before hasty repairs were made.

Many of the town’s 1,100 residents have already been ordered to evacuate. With the river expected to rise several more feet in the coming weeks, Chief Sturn and others are warning remaining town residents that up to 10 feet of water could cover Hamburg in the next week or so and could remain for weeks, or months.  If that happens, a long stretch of neighboring Interstate-29 highway will also be closed by the flooding.

Several businesses along Highway 2 in western Iowa have already closed in expectation of flooding from the Missouri River. Photo: Barney McCoy

Ten miles northwest of Hamburg, eastbound Highway 2 from the  Missouri River bridge to the interstate is already down to one lane in many places. The Wendy’s restaurant and America’s Best Value Inn and Suites are closed and surrounded by newly erected 15-foot tall piles of dirt covered in plastic and sandbags. The neighboring Sapp Brother’s truck stop is still open but will close when the flood waters begin creeping in. The truck stop’s store stock was already being cleared from the shelves when I stopped by yesterday.

Just west of Hamburg, Iowa, Army Corps of Engineer contractors have been working 24 hours a day this week to add another five feet of dirt to shore up a mile long section of levee against threatening Missouri River flooding. Photo: Barney McCoy

Today, the Army Corps of Engineers was feverishly working to pile another five feet of soil to shore up a mile long section of a smaller levee located a quarter mile west of Hamburg. It may be the town’s last resort if the Missouri River rises as experts expect it could.

West of Hamburg, in  five miles of farmland that stretch toward the Missouri River, it’s already a ghost town. Farms have been evacuated, anything not nailed down- harvest equipment, cars, trucks, furniture, clothing, live stock, pets and people- have been hauled away or evacuated.

As I stood gazing over the fast-moving Missouri River today I reminded myself that nature is still a mighty force to be reckoned with in the Midwest. This river, despite the mighty dams and levees built to contain it, still has a powerful mind of its own.

The Missouri River is at once majestic and, in the face of what may be the worst floods in a century or more, a humbling show of nature.

My views are my own and not a reflection of my employer. I'm a professor of Journalism at the University of Nebraska-Lincoln. I've also been a working journalist for the past 29 years. I have covered news stories in war zones, reported on human and natural disasters, presidential conventions, a presidential inauguration and the September 11th, 2001 attack on the World Trade Center in New York City. My career experiences include work as an award-winning documentary producer, television news reporter, photographer, producer, and anchor. I worked at WIBW-TV, Topeka, KS., KCTV, Kansas City, MO, WKBD-TV, Detroit, MI., WILX-TV, Lansing, MI. and WBNS-TV, Columbus, OH. I have also worked as a contributing reporter for The Columbus Dispatch, Associated Press, CBS, CNN, the Ohio News Network and lecture at the Kosovo Institute of Journalism and Communications. I have a bachelor’s degree in journalism from the University of Kansas and a master’s degree in telecommunications management from Michigan State University.
View all posts by Bernard McCoy →
This entry was posted in Environment, Journalism, Kansas, nebraska, The United States, Uncategorized and tagged Army Corp of Engineers, floodingh, Gavins Point Dam, Hamburg Iowa, Iowa, Missouri River, Missouri River flooding, nature, nebraska, Perceval Iowa. Bookmark the permalink.

38 Responses to The Missouri River roars and humbles