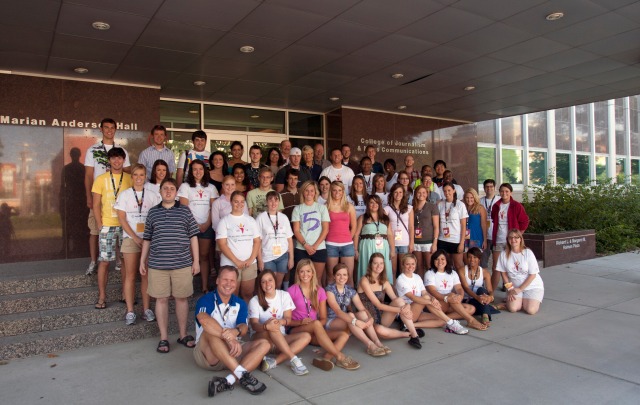 Student and faculty members of the 2010 Special Olympics USA National Games documentation team. The team is comprised of students, faculty and staff from the College of Journalism and Mass Communications at the University of Nebraska-Lincoln. Photo: Marilyn Hahn, CoJMC

For two weeks in July,  UNL College of Journalism and Mass Communications students trained and told the stories of the Special Olympic athletes, coaches, families and volunteers  who came from across America to  Lincoln, Neb. to compete in the 2010 USA National Games.

The Devaney Sports Center's stage is set before the closing ceremony for the 2010 Special Olympics USA National Games. Photo by Emily Walkenhorst, University of Nebraska-Lincoln

To be sure, this was a wild experiment by our college; throwing two journalism professors (me and Jerry Renaud) into what I feared was a dark chasm with two advertising and PR professors (Amy Struthers and Adam Wagner).

We were asked to team teach a class of advertising, PR and journalism students who would work closely with each other documenting the games in support of Special Olympics.

About 3,000 people with intellectual disabilities competed in 13 sports venues across Lincoln. 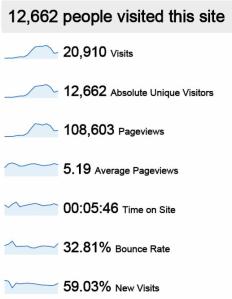 The rest of the story

These basic stats tell you what our students accomplished in this class.  It won’t tell you what these students learned about themselves and each other, or how they will apply what they’ve learned these past two weeks.

Aaron Krienert, a member of the “Special Olympics- Journalism 498” class that documented the Games, summed up his experience by writing:

So how does an unbiased journalist block out the sentiment of joy when these athletes do more when they are perceived to be able to do less? We don’t. We feed this emotion on the inside by capturing it on the outside.”

(Read about Aaron’s thoughts in this posting.) 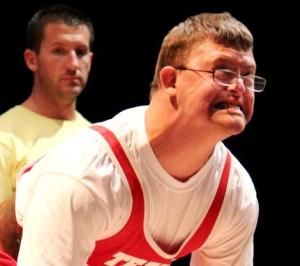 Much of what students produced were photos and video reports and vignettes on the Games.  One of the most touching was about Nebraska power lifter Gregory Blankman. He had a personal best performance while competing in the Games.   The vignette was  produced by students Mattie SimBarcelos and Amanda Schutz.  Click here to see their story. 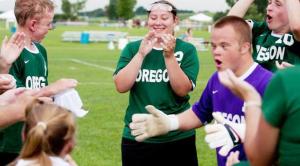 “On Friday, one unified soccer team made a goal that sent the players, coaches and fans into pure elation. The goal didn’t win a gold medal. It didn’t even win the game.

Yet for one team from Sutherland, Ore., this goal was just as sweet. The team had not scored a goal throughout the entire regional, state and national competition.

In the team’s fifth game at the 2010 Special Olympics USA National Games, one ball changed everything. In the first half between Oregon and South Carolina, Brittany Thompson received a pass from her teammate.

She dribbled toward the goal. Past the last defender. And shot.

The ball zipped by the goalie into the yellow net.”

Click here to see the video of Thompson’s goal-

Advertising student Kaitlin Arntz tried her hand at reporting when she and Beth Kavan produced a report on young athletes. Watch the report

There are many more great examples of our student’s work this past week. They’re on the Special Olympics USA National Games media website.  Please take a look if you have time.

If I sound like I’m bragging on these students, please forgive me.  I am proud of them for what they have done.

Journalism, Advertising and Public Relations students and faculty, breaking down traditional walls  and working so well together.

As professors,  we walked through the valley of cross-disciplinary teaching death. We emerged with smiles on our faces, energized by the experience.  Like Aaron Krienert, we were also touched by the Special Olympics athletes, families and volunteers whose stories we helped document.  I’m sure we’d be willing to do this again.

For some reason, Dean Gary Kebbel and Associate Dean Charlyne Berens had faith in us (gave us much support) and allowed us to pull this off.

It was amazing to watch these students apply their learning during those 12 frenetic days.  We frequently had to tell them to go home after long days because they simply wouldn’t stop working to make their stories, videos and photos better.

Most amazing of all- the personal growth and character I’ve seen blossom in this class.  Krienert may have said it best:

“But what I will take most out of Special Olympics Journalism 498 is that the media have the power to shine a light on issues the public sometimes overlooks.

Journalist Charlayne Hunter-Gault once said, “If people are informed, they will do the right thing. It’s when they are not informed that they become hostages to prejudice.”

Mass communications can change others’ outlooks – as well as my own.”

By all accounts it could easily be a new cross-disciplinary teaching model for Journalism and Mass Communications programs. I believe it was effective, and meaningful. Best of all, it was memorably fun.

My views are my own and not a reflection of my employer. I'm a professor of Journalism at the University of Nebraska-Lincoln. I've also been a working journalist for the past 29 years. I have covered news stories in war zones, reported on human and natural disasters, presidential conventions, a presidential inauguration and the September 11th, 2001 attack on the World Trade Center in New York City. My career experiences include work as an award-winning documentary producer, television news reporter, photographer, producer, and anchor. I worked at WIBW-TV, Topeka, KS., KCTV, Kansas City, MO, WKBD-TV, Detroit, MI., WILX-TV, Lansing, MI. and WBNS-TV, Columbus, OH. I have also worked as a contributing reporter for The Columbus Dispatch, Associated Press, CBS, CNN, the Ohio News Network and lecture at the Kosovo Institute of Journalism and Communications. I have a bachelor’s degree in journalism from the University of Kansas and a master’s degree in telecommunications management from Michigan State University.
View all posts by Bernard McCoy →
This entry was posted in broadcasting, education, Journalism, nebraska, new media, newspapers, Special Olympics, Sports, television, The United States, Uncategorized, University of Nebraska. Bookmark the permalink.