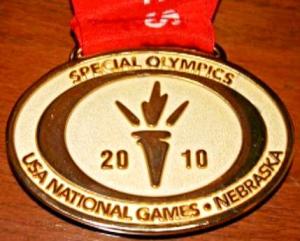 This may be the most fun I’ve had as a journalism professor at the University of Nebraska-Lincoln. It’s exhausting, mostly fun and a fascinating experiment that combines journalism and advertising students, faculty and staff.

This class of 55 journalism and advertising students have been training 10 hours a day this week to document the Special Olympics 2010 USA National Games. Planning and coordination for the class began last year. Now, we’re off and running, sometimes even flying by the seat of our pants, as we do our darnedest to cover this amazing event.

About 3,000 Special Olympics athletes will compete in 13 different sports across the city of Lincoln. The games, which will be the largest multi-sport event in the state’s history, is expected to attract 15,000 family members and friends, 1,000 coaches, 8,000 volunteers and 30,000 fans.

When the USA National Games begin on Sunday our students will shift into high gear.

Besides the Special Olympic athletes, our students will be covering each one of the 13 competition venues; basketball, aquatics, tennis, power lifting, flag football, bocce, soccer, bowling, golf, track and field, rhythmic gymnastics, volleyball and softball.

Lincoln will play host to the athletes, their coaches, families and an estimated 30,000 spectators next week.

The athletes begin arriving Saturday in a massive airlift that will turn Lincoln Airport into one of the world’s busiest airports, according to Special Olympics officials. Our students will be there to document the event.

The economic impact of the 2010 USA National Games on Nebraska is estimated at $5-million. This is also part of the back story to the Games that our students are following.

This has been fun for me because it’s clearly fun for the students. They’re training and applying what they have learned as they cover this national event. They have enjoyed the challenge and are taking the initiative as they plan stories, work with each other and produce content.

The Special Olympics 2010 USA National Games is also an event involving some of America’s most inspiring athletes. They’re all coming to Lincoln later this week. Each has a story to tell. Our students will have the privilege of sharing many of those athlete’s stories with you. They will involve perseverance, character and an unrelenting can-do attitude.

So: Let the the Games begin.

*Special Olympics is an international organization that changes lives by encouraging and empowering people with intellectual disabilities, promoting acceptance for all, and fostering communities of understanding and respect worldwide.

My views are my own and not a reflection of my employer. I'm a professor of Journalism at the University of Nebraska-Lincoln. I've also been a working journalist for the past 29 years. I have covered news stories in war zones, reported on human and natural disasters, presidential conventions, a presidential inauguration and the September 11th, 2001 attack on the World Trade Center in New York City. My career experiences include work as an award-winning documentary producer, television news reporter, photographer, producer, and anchor. I worked at WIBW-TV, Topeka, KS., KCTV, Kansas City, MO, WKBD-TV, Detroit, MI., WILX-TV, Lansing, MI. and WBNS-TV, Columbus, OH. I have also worked as a contributing reporter for The Columbus Dispatch, Associated Press, CBS, CNN, the Ohio News Network and lecture at the Kosovo Institute of Journalism and Communications. I have a bachelor’s degree in journalism from the University of Kansas and a master’s degree in telecommunications management from Michigan State University.
View all posts by Bernard McCoy →
This entry was posted in broadcasting, Economy, education, Journalism, nebraska, new media, newspapers, Special Olympics, television, The United States, University of Nebraska. Bookmark the permalink.